IN COLOMBIA, THE IDEO CENTER OF MEDELLIN IS NOW EQUIPPED WITH VIADIRECT 3D WAYFINDING SOLUTION

In Colombia, the IDEO center of Medellin is now equipped with ViaDirect 3D wayfinding solution.

Located in the city of Medellin, the IDEO center specialized in home design and decoration is now guiding its visitors thanks to a kiosk using ViaDirect 3D interactive map since November 2018. The kiosk furniture is designed after the iconic ViaDirect Gazelle model, known for its big LED lighted I (for Info) and a 43’’ touch screen.

Capital of the Antioquia department, Medellin is the second most populated city of Colombia after Bogotá with more than 3,3 million inhabitants and the second biggest economic center of the country.

The Medellin IDEO center puts together on two floors under the same roof many specialty shops on home design, decoration, construction, and technologies. Its 2018 catalog/magazine is available on line here.

In partnership with investment fund company PEI, the Medellin IDEO is managed by Colombian real estate company Accuro from Bogotá. The companies also collaborate on two other IDEO centers, one already opened to the public in Cali, and another one soon in Barranquilla.

Headquarter is located in Paris, France. 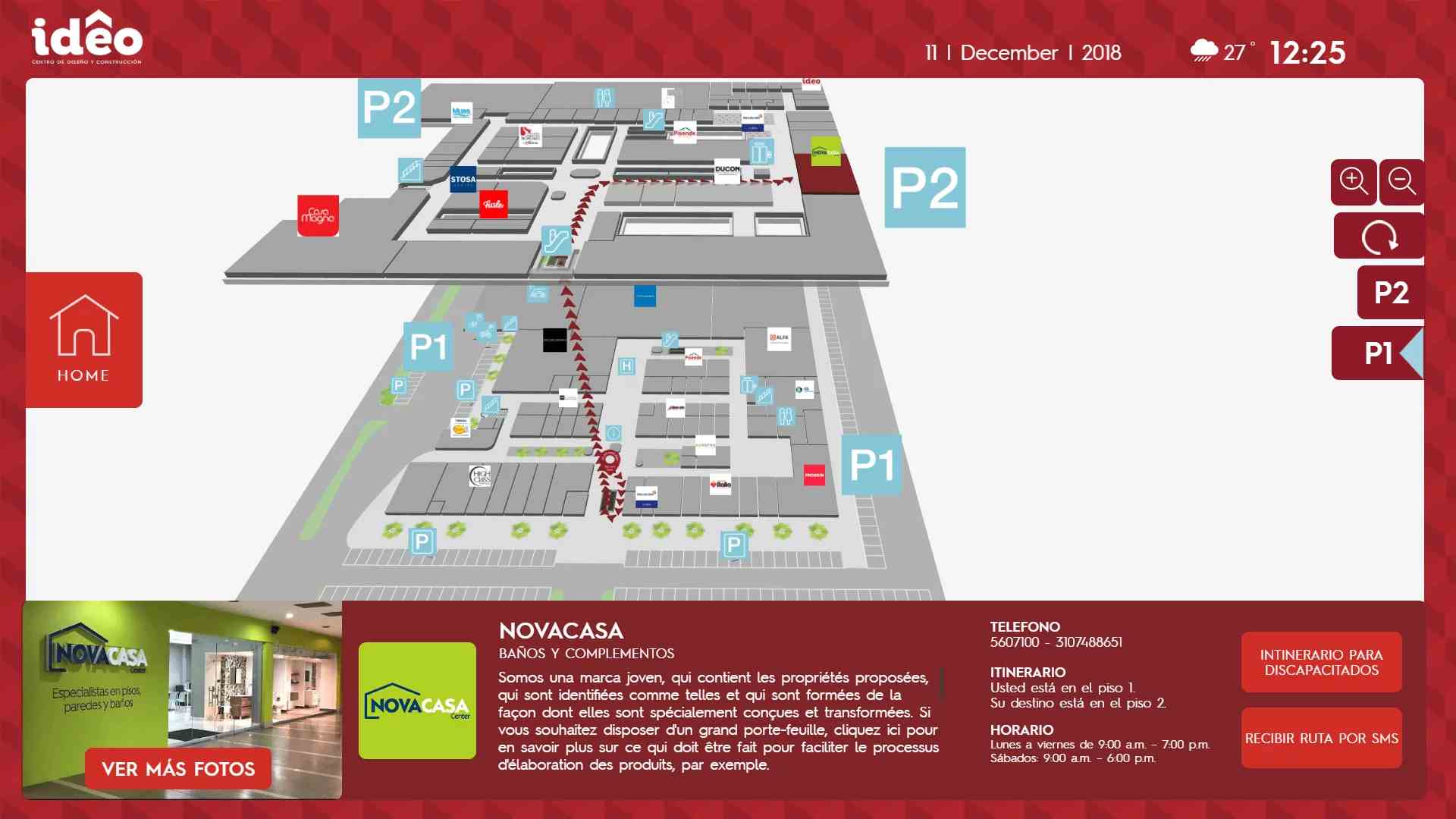 30 November 2021
Originally, wayfinding referred to tools used by explorers, this has changed somewhat, it is now employed by business like ViaDirect to...
Read More

23 November 2021
Dania Pointe, a mixed-use facility offering shopping, dining, entertainment, is getting new service for its customers thanks to ViaDirect. Located on Dania Beach in Florida...
Read More

12 November 2021
After a long wait, we are finally back at the Mapic show for the year 2021. You will be able to find the Viadirect booth...
Read More

4 November 2021
Destreland shopping center of the island group Guadeloupe has been equipped with our wayfinding solution for a long time. So, we have reworked the software...
Read More

14 September 2021
ViaDirect is proud to announce its participation in the #TousEntrepreneurs initiative deployed by Bpifrance, Pôle Emploi and CitésLab! Bpifrance, which has been our longtime partner,...
Read More

8 September 2021
Up and running since February 2016, ViaDirect has been equipping Antea Lifestyle Center of Querétaro city with 13 interactive wayfinding kiosks. The shopping mall named...
Read More

This website uses cookies to improve your experience while you navigate through the website. Out of these, the cookies that are categorized as necessary are stored on your browser as they are essential for the working of basic functionalities of the website. We also use third-party cookies that help us analyze and understand how you use this website. These cookies will be stored in your browser only with your consent. You also have the option to opt-out of these cookies. But opting out of some of these cookies may affect your browsing experience.
Necessary Always Enabled
Necessary cookies are absolutely essential for the website to function properly. These cookies ensure basic functionalities and security features of the website, anonymously.
Functional
Functional cookies help to perform certain functionalities like sharing the content of the website on social media platforms, collect feedbacks, and other third-party features.
Performance
Performance cookies are used to understand and analyze the key performance indexes of the website which helps in delivering a better user experience for the visitors.
Analytics
Analytical cookies are used to understand how visitors interact with the website. These cookies help provide information on metrics the number of visitors, bounce rate, traffic source, etc.
Advertisement
Advertisement cookies are used to provide visitors with relevant ads and marketing campaigns. These cookies track visitors across websites and collect information to provide customized ads.
Others
Other uncategorized cookies are those that are being analyzed and have not been classified into a category as yet.
SAVE & ACCEPT