FRANCE. THE TRAIN AND BUS STATION OF MARNE-LA-VALLEE CHESSY NORTH AND SOUTH WERE EQUIPPED WITH VIADIRECT’S INTERACTIVE WAYFINDING KIOSKS

In accordance with the station itinerary digitalization, IDF mobility and its operator Transdev have chosen ViaDirect for experimentation with 2 interactive wayfinding outdoor kiosks that were placed near the TGV station Marne-La-Vallée and next to the amusement park Disneyland Paris. These kiosks offer essential information for guiding all the travelers at the arrival and departure of the first European touristic destination (more than 15 million visitors per year).

Thanks to ViaDirect’s interactive 3D wayfinding software, the users can see a representation of the north and south stations including the surroundings of the Disneyland amusement park in order to be guided in a better way and to arrive on time to their destinations.

In addition to this, the kiosks display detailed information about train and bus schedules and possible delays and problems. Ile de France mobility is the syndicate of Ile de France transports, which is the administrative public entity responsible for the transportation in the Ile de France region with 3,7 million euros invested in 2005 for the functioning of the different transportation networks in the region. Transdev is a multinational private transport company present in 20 countries with more than 11 million passengers that travel daily with them. 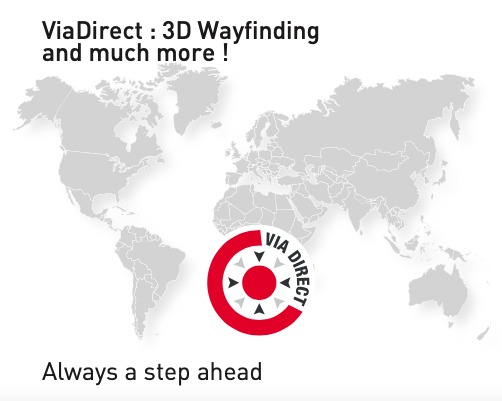 22 September 2021
ViaDirect has been equipping shopping malls managed by the real estate group Carmila for several years now, and it has recently updated the wayfinding software...
Read More

14 September 2021
ViaDirect is proud to announce its participation in the #TousEntrepreneurs initiative deployed by Bpifrance, Pôle Emploi and CitésLab! Bpifrance, which has been our longtime partner,...
Read More

8 September 2021
Up and running since February 2016, ViaDirect has been equipping Antea Lifestyle Center of Querétaro city with 13 interactive wayfinding kiosks. The shopping mall named...
Read More

24 May 2020
ViaDirect, in collaboration with its partner Do-IT whom we thank for the operation, equipped the Mohammed VI University Hospital in Bouskoura, Casablanca which is still...
Read More